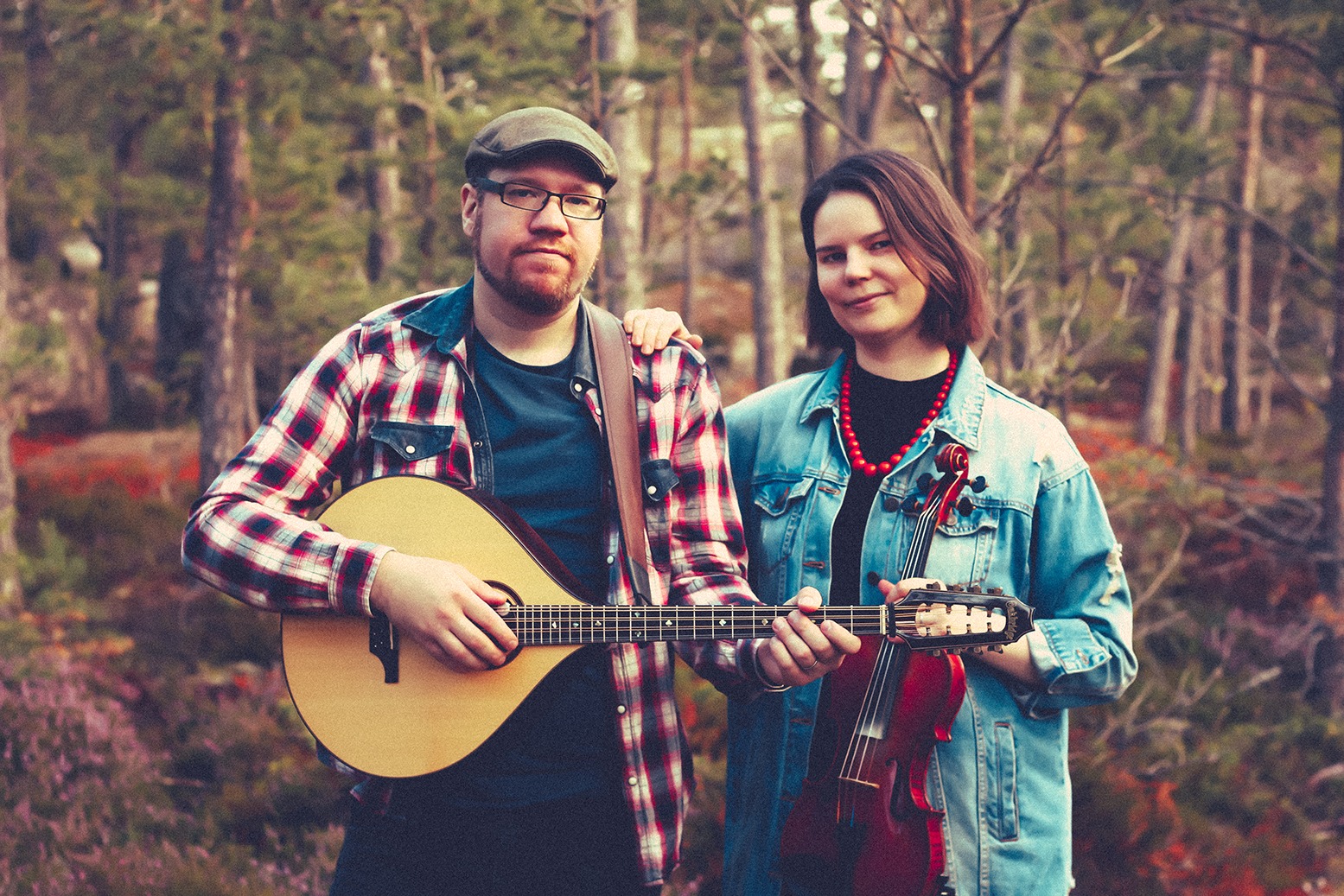 More about our upcoming album Obsidian

Tailsway is a duo that sounds more like a band. That is because the two of us like to sit in our home studio and work on our music a lot.

The band members are Pernilla Bergman and Johan Nordström. We met in 2010 through music. At the beginning our intentions with Tailsway was to play some gigs as a duo, with only fiddle, bouzouki and a stomp box. But as the years went on it evolved to something entirely different.

As we both are into sound engineering and music production we decided to record an album at home, consisting of ten of our own tunes. When we had recorded a foundation with bouzouki and fiddle we started adding ambient effects with the fiddle. Then came harmonies, then even crazier fiddle ideas and the whole project started moving forward. Like a rolling snowball the production just grew bigger and bigger.

We added drums, bass, percussion and keyboards and a lot more. As the project grew we decided that we didn’t want to rush it. We wanted to release an album that we were really happy with. As we do everything ourselves this project has taken quite some time. But now we are happy to say that we have the finish line in sight.

We are even happier to say that everything on this album (except for the drums on some of the tracks) is done by the two of us. Everything from playing the instruments, recording, mixing, mastering to doing the graphic design, launching our website and the marketing is done by us. Turns out it is really time consuming and exhausting, but well worth it in the end.

If you want a taste of what our debut album Obsidian is like you can listen to our two singles Autumn Winds / The Twister and Broken Rails.

If you like our music we would be happy to have you as a follower on social media. Go here to find links to our music, websites and social media.

A short video presentation of our music

Our debut album is going to be named Obsidian. Why, you may wonder? Well first of all we like the black color with the glassy lustre and reflections of purple.

Obsidian is a naturally occurring volcanic glass. It is formed by the rapid cooling of lava from volcanoes. It has had many uses throughout the ages. The Native Americans used it for tools and weapons like knives because of its capability of being very sharp. A small number of surgeons still use obsidian scalpels today to carry out fine incisions that they say will heal with minimal scarring.

We (Pernilla and Johan) have been trough much. Our biggest battle is against Pernillas chronic disease that is affecting her lungs badly. She went through seven surgeries before the age of 25. Years of setbacks have been rough, but in a way it has made us stronger.

We are handling whatever life throws at us in a healthier way. We know to treasure the small things in life and to enjoy every moment together. Because that’s what is most important to us.

Not unlike obsidian we try to cool down rapidly nowadays, so that our scars won’t get to deep. And we try to reflect our obsidian glassy lustre trough our music.

We hope that you enjoy our contemporary folk music. The album is coming out later this year and all the tunes on it are our original compositions. Visit the link in our bio to listen to our latest single.

If you enjoy our music we would be very happy if you followed us here or on your preferred music streaming service. And if you want to support us you can do so by buying our music on Bandcamp.

Took my fiddle out in the sunshine to play. Looks like it's time to clean up the rosin…maybe? 😆

Want to hear what the city of Pargas in the Finnish archipelago sounds like? No problem. We made some playlists for you on Spotify and Youtube. Check them out to find out if you or someone you know is included on our playlists. Don't forget to subscribe because we are updating them continuously. Just follow the link tree in our bio to get to them.

Hey! We are happy to announce the release of our new single Broken Rails. Hope you like it! And if you do feel free to add it to a playlist of yours. We are also on Bandcamp now. So if you want to support our music projects head over there. Follow the link in our bio to listen to our new single.

Another picture from our forest photo shoot. The brown-red bushes are matching my fiddle quite well 🙂
The photos are for our upcoming album Obsidian. Check out our Bio for more info.
And also, a new single is coming soon. Can't wait to share it with you!

Playing the bouzouki in the middle of the forest? Or taking promo pictures for our upcoming album? Or maybe both 😉

We have released one single and plan to release another one later this fall. If you're interested in contemporary folk music with celtic influences feel free to follow us here. You can listen to our single Autumn Winds/ The Twister if you go to our profile and follow the link there.

Today we took our instruments and walked into the forest to take some photos for our debut album that is coming later this year. To listen to one of the album tracks follow the link in our profile.

Hey! This is a short sneak peak of our album Obsidian, that is finally going to be released later this year. We are in the process of mixing the tracks now. The making of this album has taken quite some time. But it will be music that we can say we are proud to release. Hope you enjoy this short little sneak peak!